We have all heard that from the mouths of babes comes truth, but I sometimes wonder how much we also pay attention to their actions and how often their actions are a reflection of our actions. On the grand scale of global conflicts most people have decided that violence is a complicated thing. We work diplomatic solutions while at the same time use the excuse of determent to feel better about housing large amounts of weapons that can kill more people than currently exist on the earth (which might be a bit excessive even in the name of security). The majority of the church both Roman Catholic and Protestant, at least in the Western world, has developed a complicated theology of justification for conflicts involving whole countries. This is a theology that has required the brains of great thinkers like St. Augustine and Thomas Aquinas. I think this complexity of thought has muddied up the waters of understanding violence. I also think my generation has a hard time focusing on violence in a real way because we grew up as part of a nation at war, yet whose daily lives have been largely unaffected by said war in the major ways that wars usually affect a country (the notable exception being families and friends who have lost loved ones as part of the fighting and will never forget that impact of the war…I am one such person). 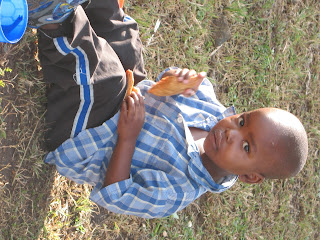 In the last month a little child named Chacha has taught me a lot about how our actions can often be perceived by others. He has also taught me how simple it is to understand violence without the complication of the Just War Theory and nuclear armaments. Chacha is three years old, yet seems to have the mind of someone much younger. Since we work with orphans it is not uncommon for the full story of their lives up to the point of entering Angel House to be unknown. Chacha is one such child. Since Chacha’s communication skills is one of the things that has remained underdeveloped setting boundaries and discipline have been major problems for the staff. One of our steps of discipline after verbal instructions and discussion is a physical reminder. This is not beating, but can be anything from physically removing the child from a situation to a small spank to get the message across that an action is not good. This is used possibly more in Chacha’s case because communicating verbally with him almost never works. Chacha’s response though is the most interesting thing. He often times does not understand that he is in trouble or that he is doing anything wrong. He does not seem to have much of a sense of what a discipline system is so his response is often to spank back. I think this is a very telling response for a child that often acts on instinct more than any kind of fore-thought. He already knows at a young age that physical violence of any kind elicits a physically violent response. He is not old enough to understand that I am an authority figure whom he should respect or he does not have the forethought that I am bigger and could end up hurting him more than he can hurt me. He just goes on the instinct that you respond to violence with violence. I think this shows how much some things are a learned response and how much violence is being learned everywhere in the world. In fact earlier this week another child was crying and Chacha at first hit the other child and told them to be quite. He was much smaller and this didn’t hurt the child, but it was still disturbing. I came up seconds later and tried to sooth the child instead of using the “I’ll give you something to cry about” method. Chacha came up right behind me and copied my behavior of soothing. He, like most children, repeats what he sees. Children learn violence from abusive parents just as smaller communities learn violence from bigger, more powerful, abusive communities.


Chacha is also Kuria, one of the most violent tribes in Tanzania, one of the tribes most likely to fight with others and most likely to fight among themselves. This is a tribe whose members have learned violence as a way of life for generations. This is a tribe for whom I would say life has a different value than it does for most of us from the West. My hope with Chacha is that I can develop different, more intentional means of communication and discipline that can teach something besides violence. I often have the hope that a same simple, yet hard solution can also be found on the world stage.
Much like a scientific formula, violence on one side is always somehow balanced by violence on the other side. You can add more chemicals and more elements to change the makeup of the formula, but violence will still always equal violence. What we need is a new formula not a more complex formula, a new way of life instead of more of the old way of life, and a path that follows the person of perfect love and non-violence instead of the raising of the value of a death over the value of many lives.
Posted by Eric and Liz Soard at 10:39 PM