Sunday, October 22nd, 2019 was an overcast and dark day, but Wesley College staff still participated in their first ever race. Seven staff members from Wesley College ran the 5 kilometer race as part of the Rock City Marathon while I ran the half-marathon, 21 kilometers. Not only was it a lot of fun to promote something new to the staff, but it was also inspiring to watch them come together around this city wide event. It was also exciting to see them work together for the sake of their students. 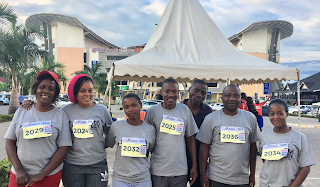 Wesley College is dedicated to building up the community through education. Many of the students at Wesley College come from impoverished backgrounds and are the first ones in their family to attend college. On average 40% of Wesley College students receive some kind of financial assistance so that they can finish their certificates or diplomas programs. So the staff decided to see how they could contribute by finding people to sponsor them in the race with the funds going towards the scholarship fund from which Wesley College supports its students. The staff were able to raise 900,000/= towards scholarships which covers one year of school fees for a diploma student.

This benefits students like Neema* who was orphaned at a young age and grew up with a neighbor, who provided for the basic needs, but could not afford to send someone from outside of the family to school. Neema received a scholarship for her first year at Wesley College and finished her certificate in community development. Due to her effort and energy in class the staff took an immediate liking to her and even helped her with money to get back and forth from her field practicum, a requirement for all students. The chance for her to be able to return and finish her diploma in community development is a huge step towards lifting her out of poverty and ensuring that she has a foundation for her life which would have otherwise left her without a family and without a future. 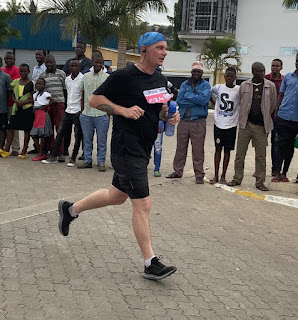 I am very thankful to all the Wesley College staff who participated, raised funds, and made sure that students like Neema can finish their education. And I am thankful that I didn't wake up too sore on Monday morning.

Scholarship Selection and the Importance of Proximity

I will continue to maintain that proximity is the most important part of development. If anyone, and I mean anyone, truly wants to make a difference in the world you have to be close to the people that you want to work with, empower, and ultimately help. The only thing that comes in a close second is supporting those who are in close proximity. That is why you find me where I am, in Tanzania, doing work that I love, but which I know would be almost impossible to do from anywhere else. Today I had another example, among many, as to why proximity is so important.

This afternoon the scholarship committee of Wesley College sat to figure out which of the students who applied for scholarships was going to receive them. We had 10 new scholarships to assign and almost 30 students who had made requests. What I can say is that all of the students had the grades, some better than others, but all of them will do well at Wesley College. All of the students have financial need, they were orphans, single mothers, students who are young adults who have been left on their own with no family support, small holder farmers whose entire family makes less than $75 a month. And I saw the members of the committee dig into what is a beautiful and sometimes depressing struggle.

I would say that there are many people in the world who could help contribute to these students so that they could study and finish their college education. Some of you reading this may have already done so. But many, many of the people who have this ability do not know these students. They don’t know the students without parents who are raising themselves and trying to find some piece of calm in their lives to study. They don’t see how their grades slowly improve the longer they are in the Wesley College environment of caring teachers, daily prayers, and encouraging classmates. They don't know the single mother with 12 children, 2 of whom are currently studying at Wesley College. They don’t get a chance to share in the dreams of students who see their chance at education as a way to change their communities, but lack a simple $500 to be able to cover their tuition fees. I say that because I believe if they did know them and did see them, that we would have been able to choose many more students for scholarships today.

At the same time the scholarship committee was able to experience something new today. They have the proximity and have had the proximity for much of their lives, and for the first time they were given the ability to get to decide who to help. They were faced with the dilemma of having the resources to help change someone’s life, even though it wasn’t enough to change everyone’s. And the conversation, the comments made, the way that they were pulling for the students and seeing the possibilities for change within their lives through this small gift is to be honest one of the more inspiring things I have seen in a long time. They know these students since many of them are returning students, having finished their certificate level and are now applying for diploma. They started asking questions about how we get the scholarships, how we could raise more, and what they could do in order to help. It was because of their proximity that it became something so real, raw, and powerful within this small group of staff.

So I say again, proximity. Get to know the people around you. Get to know the vulnerable populations, and get to know their names, faces, and stories. And if you feel so moved, consider supporting scholarships at Wesley College. We have a group of very committed, very thoughtful staff who are hoping and praying for a few more scholarships so that one more orphan, or one more young adult hauling and selling water or making handmade soap for a living can get their education and transform their life.
Posted by Eric and Liz Soard at 10:03 AM No comments: