There is probably the perfect person to write this blog. A Ph.D in Wesleyan studies with a resume a mile long that includes teaching practical Wesleyan theology all over the world. That person probably exists, but I am not them. I am a missionary, with no seminary training, trying to make things work in a place with no church buildings (though we are working on it), no pastors with even high school education (though we are working on that to), and relying fully on our intelligence, the training and instruction available to us, what Bible study we have been able to do on our own, and oddly enough ;) the Holy Spirit. This is my disclaimer that this is not an expertly written blog on Methodist, but the observations of a person working with fledgling local churches, having read a copy of Wesley and the People Called Methodists.

As we continue to visit with churches, move past mere introductions and really start getting into the life of the various churches we work with we have started to get a picture of how the people we know worship with and work with entered the United Methodist Church for the first time. You have to understand that the first United Methodist Church wasn’t planted in the Mara Region of Tanzania until 2005 so NOBODY grew up in the United Methodist Church. I have been a United Methodist for longer than anyone that I work with whether they are 5 or 50. We have head over and over again from faithful Christians of the various churches that they have been a part of. Some of the left a previous churches because of bad leadership since there is a struggle here in Tanzania to keep the church from turning into someone’s personal business. Others didn’t leave their previous church, the previous church left them, just one day shutting the doors. The leadership left, the money left, the missionaries for that denomination came and left and there just wasn’t enough of a foundation for the church to continue. I have heard this story over and over again, most recently from one young man who has traveled up to an hour away to attend church. He has been in leadership in four different churches having attended five different denominations and he is not much older than I am. Every single one of those churches has ceased to exist.

As I continue to talk to church leaders and occasionally think of that time when we will no longer be in Tanzania, however far away it may be (one person told me I can only leave after I have grandkids J). I wonder what will keep the churches going that we are working with now. I think the foundation that will keep these churches moving long after we are gone, other than the Sunday School answer of Jesus (true as it is), is lay leadership, small groups that care about each other and hold each other accountable, practical, relevant theology that addresses the concerns of the people instead of weighing them down more than they already are. Things like grace in their daily lives, teaching theology not just to pastors, but to everyone. In short, Methodism will keep these churches going. The same movement that saw the American Methodist church grow in the early days of the US without a single ordained pastor is also perfect for Tanzania.

I work in one of the fastest growing areas for Christianity in the world. The society is changing and people are hungry to have an identity in something larger than themselves, yet their traditional values and practices are falling under the steady machine of modernity. For all of this I truly think that one of the most helpful models for community and certainly for the church, that can help secure a peaceful future for the people of Tanzania is Methodist in its earliest form. I think we would all benefit from learning more from a movement that has launched more schools and hospitals than almost any other denomination in the world, and has impacted so many people. Especially a movement that is so grounded in Christ and his love for us and our love for him.

For someone with a much more informed opinion on the contemporary church that gives a shout out to Methodism check out this blog by Jonathan Wilson-Hartgrove where he interviews Diana Bass.
Posted by Eric and Liz Soard at 9:05 PM No comments:

Be the Church...In the Community


Saturday I did one of the things I am most glad to do and yet most detest doing. I went to a funeral. Harder yet I helped lead the funeral of a ten year old boy. I was mainly there to help organize, though I also had the responsibility of preaching. Most of what I had to say to the family and the community came from the child himself, his name was Emmanuel so I spent most of my time talking about how God is with us even in situations like this. I thought the hardest part of my day was over after the body was buried and as the community was gathered to share a meal, but I was wrong. I found out that the child most likely died because of neglect on the part of the family. The child and grandmother would come to church, but the parents did not. The mother started coming, but her husband later refused for her to be able to come to the church. The father refused for his wife to come to the church because he wanted his family in the field working on the farm seven days a week, several hours longer than most people around here work in the field, and that is a long time. The father used his family very much like slave labor, making them work in the fields for long hours. When the son fell sick the father took him to the local healer, not wanting to spend the money on a hospital even though he had it as a result of his family working for his benefit. The result was a dead child, a funeral led by the church, and a very angry pastor...not me (though I was also angry), but Anna who loves children and was furious that this happened.

This is the most important job we have as a church. It is not to have worship once a week, it is not to get as many people as possible to say the Sinner's Prayer (which I still haven't found in the Bible), it is not to fill out Annual Conference reports that make us look better than the year before. Our most important job is to be present in the community, showing them the love God has for His children, the worth that everyone has for the simple fact that they are people, to be a light that refuses to retreat behind the walls of our church building, but insists on being seen and heard as a better way. A way of freedom for the oppressed, not just as they enter heaven as Emmanuel has done, but even as they live here on earth.

Don't go to church. Be the Church...In the community.
Posted by Eric and Liz Soard at 11:04 AM No comments:

Labels: Be the church, community, emmanuel 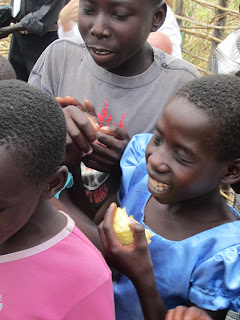 I was so excited about World Communion Sunday after last year. Last year we were able to plan ahead, get videos from several different churches in the US and the church in Gamsara and put together a communion liturgy from different parts of the world. This year has not contained nearly enough advance planning, year to date. A baby, new job, new church plants, etc. tends to do that to you. However, I want to share this picture and text in honor of World Communion Sunday this October 7th, 2012. This picture was taken at Randa United Methodist Church. Every time we have communion at a church the bread not used during communion is given to the children. We have had communion almost every week for the last month so I have been blessed to see many different children receiving spiritual and physical nourishment from the church. The joy with which they receive simple bread, not the Hawaiian bread, but just regular, ole’, half-the-time-stale bread is a testament to their spiritual nourishment and their physical hunger.

I recently shared with a friend our vision for missions here in Tanzania as we work with people here and host people from the US. We want to address poverty in whatever form we find it, spiritual poverty, relational poverty, and physical poverty (Genesis 2:14-19). We all have some kind of poverty that we struggle with, and sometimes more than one at a time. As we approach this World Communion Sunday I want to reflect on the passage in 1 Corinthians 11:17-33. If you get a chance I encourage you to read the whole text, but I want to highlight 1 Corinthians 11: 18, 20-21.


“In the first place, I hear that when you come together as a church, there are divisions among    you, and to some extent I believe it. When you come together, it is not the Lord’s Supper you eat,     for as you eat, each of you goes ahead without waiting for anybody else. One remains hungry, another gets drunk.”


Some of the people in this passage are struggling with physical poverty. Some of the people in this passage are struggling with relational poverty. Some of the people in this passage are struggling with spiritual poverty.
I recently was reading some material on the basics of faith in trying to prepare a class for potential church members. It had a picture in there of God in the center of our lives and all of us starting on the outer circle away from God, just one point in the circle of humanity. This illustration pointed out that in moving closer to God, in being in COMMUNION with God, in easing our spiritual poverty we are also constantly moving closer to other people, constantly increasing our COMMUNION with other people, and constantly easing our relational poverty. This passage in 1 Corinthians illustrates the last point of this teaching and explains John Wesley’s quote of “no holiness but social holiness.” In order to be in communion with God we must also be in communion with others. It is a natural effect of our relationship with God. In being in relationship with others as God would have us be and as 1 Corinthians displays we cannot run ahead of others for social gain or physical comfort, find a place that is good for us and wait for them to catch up. Being in communion with others sometimes means waiting, sometimes means sharing, and sometimes means putting others needs in front of our own.
This World Communion Sunday we need to remember that the Lord’s Supper is the sharing of a meal with God and the sharing of a meal with others, an old practice of family and hospitality. As we share in this World Communion Sunday I pray that we can remember EVERYTHING that God calls us to share with one another (James 2:15-16 – Suppose a brother or sister is without clothes and daily food. If one of you says to him, “Go, I wish you well; keep warm and well fed,” but does nothing about his physical needs, what good is it.) Maybe we can find our poverty, whatever it may be, being eased as we also ease the poverty of someone else. And all of us together, as one body, the world over, may take a step toward God, toward each other, and dance with the little children who smile over stale bread.
Posted by Eric and Liz Soard at 6:32 AM No comments: