The Hope-Filled Depression That Is Our Work


Someday I will get around to writing about the crusade at Gamasara or the district goals that came out of our district meeting in early September, but for now I can only reflect on the one day this week that really reminded me what our purpose is for being here and how it will one day be fulfilled.

My “work” day ended standing in a room, dirt floor, mud walls, grass roof, surrounded by a grandmother, grandfather, mother, thirteen children, and a lay pastor to the church in Masalula. We were praying for two of the children that had been really sick. This was my fourth dirt floor, mud walls, grass roof house of the day. This was my second time praying for sick family members, once we prayed for people with broken bones being cared for by another local pastor, and at the only house where we didn’t pray for disease I was asked to interpret an HIV test where the result had been written in English. Thank God it was negative, but why were they able to treat the test itself and the result so casually. The young man just shrugged, said thank you, and walked away. I wonder how many more tests before he gets the picture or loses the HIV lottery?

We stood in this last home before I headed to my own and prayed for the family and sang praise songs together. I have no idea whose children all of these were and I didn’t ask. I have heard that story too many times. Some were surely the mothers, some were probably other grandchildren of children who had passed away, or great nieces and nephews. When push comes to shove you can always make room for one more. These were the grandchildren of the grandfather who told me that any of his neighbors, and I suspect him, would give me a child to take and care for as my own if I wanted to. He said, “You could take one for a week, a month, or a few years. We would be happy knowing they were safe and healthy.” This was the first day I had ever met him. I don’t think his words were a reflection of my character as much as they were his and his community’s desperation. This sunk in really hard. My one hope in leaving this house walked out right beside me, the lay pastor, a member of this community and the leader of the only church in the area.

I had been in his house earlier when the thing he was most excited about was our shared interest in reducing the poverty of the area and considering this as much the true work of God as evangelism or anything else. He explained his plans for a flour mill where he can grind corn for free for farmers who have had a bad year. We are going to try and get some support for him since he could never do this on his own. Heck, we were talking later of his plans for a church garden where the food could go to widows in the community who needed it. He despaired, however, of ever getting the funds together to get it plowed. Renting cows is all of $4 a day, but the almost $20 it would take to plow it was out of the reach of the church. This makes the flour mill, which will provide some support for the church’s ministries, that much more important.

As I left this last house for the day, the grandfather asked me to pray for the strength of this pastor, because this church was, in the grandfather’s opinion, the hope for the community. I cannot tell you how happy this made me. He didn’t say you are our hope, but this pastor and the church were his hope for the community. This pastor who saw opportunity in a garden that could provide food for widows and who wanted to build a church that could provide homes for orphans. It is our blessing to work with people like Benard Angira who have a vision for their communities and just need some help and guidance to make this vision a God-given reality. 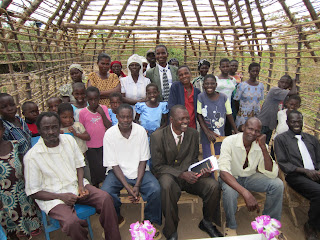 Posted by Eric and Liz Soard at 8:52 PM No comments:

Don't Come to My Church

I was asked a very interesting question last week, that surprisingly I very rarely am asked, “Why?” Why should I come to your church?

The question was asked directly following a funeral I had just done for a woman that was not a Christian. It came from one of her family members as we visited after the funeral. I guess that my favorite part of the conversation was that the answer lay in some of what he had just seen. The son of the woman that died is a part of the church, and the church community showed up for the funeral. Not only was I there with two other pastors, but some people from the choir showed up to sing, and church leaders showed up to give support as well as contribute for the funeral. Funerals in Tanzania are expensive and labor intensive, and it is important to receive help with all the expenses and actual day of labor. I was able to be there when the local government came and tried to tell the family that they could not do the funeral at home, and church members where there to help coordinate and assist in the funeral service.

The community that was seen at the funeral is a type of community that everyone needs. A community that is willing to give and help because you are like family to them. I was encouraging this inquisitive family member to find a church home and stay put. If we are willing to find a church home and grow as the church grows, to learn how to be in relationship with people we don’t really even like, and to help as much as we receive then we may learn how to be the church instead of just going to church. I am getting that printed on a t-shirt some day for the churches here. That is our goal, the only one that really makes sense to us, that every church is a church that is a home, a family, to those who come to worship and that a community of God’s love grows out of their presence, study, and worship. 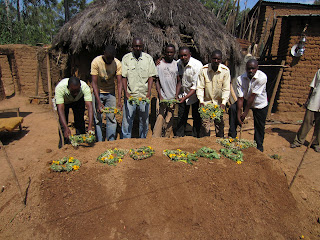 Huendi kanisani. Kuwe kanisa.
Don’t go to church. Be the church.
Posted by Eric and Liz Soard at 4:15 AM No comments: