It Ended Up In the Hole

My current time in Tanzania with Angel House has been a time of growth. Grass Roots (the organization over Angel House and the rest of our ministries here) is in a time of growth. We are building a secondary school, developing our staff to better take care of our kids, and even looking at different partnerships within Tanzania. All of this development is prompting me to step into roles and jobs that I have never done before. There is a lot of on the ground learning going on. One of the lessons I am learning well is patience. 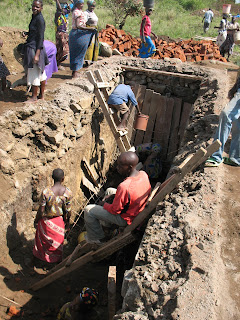 Earlier this week the student bathroom that was the farthest along in the construction process decided it did not appreciate what its foundation was doing for it. The bathroom decided to fall in. I am sure that the rain and newly poured cement adding a lot to the weight of the foundation helped contribute to the fall. I also know that the fall contributed to my stress level as it sets our construction of the school back on the timeline. I have encountered many such setbacks, stalls, and roadblocks since we have been back. And unfortunately I am not a patient person by nature. Every time I find myself up against something that threatens to derail “our” plans once again I am reminded that what is often the most important thing in any situation is how you respond to it. It is easy to grow frustrated and it is easy to wait for someone else to figure out a solution. What I have learned to be more difficult, but worthwhile is to gather the right people around you and work together toward a solution. 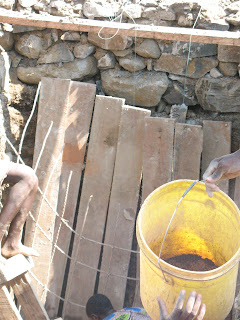 I was reading in the Gospel of Luke about Jesus going to the temple and reading the passage in Isaiah that outlined Jesus’ ministry and named him as anointed by God. This was the verse that proclaimed that Jesus came to give sight to the blind, freedom to the oppressed, and release for the captives. What most caught my attention in that passage though was that Jesus was simply doing what he always did. The opening few verses say that Jesus went to the synagogue as was his custom and that he read from a scroll that was handed to him. This was the day to announce in his home town the start of his ministry, yet this day was also just one in a string of faithful attendance to the place where he had grown up worshiping his father. This big day in his life was not altogether out of the ordinary. That is something I struggle with. I struggle to have the patience to do the day in, day out work awaiting the big days, even if the day in and day out are what make those big days possible.
I am learning patience. I am learning to deal with setbacks. I am learning to be constructive in slow, patient, steady ways so that someday the announcement can be made, on a day like any other, that it is the finally day we have been waiting for.
Be joyful in hope, patient in affliction, and faithful in prayer. ~Romans 12:12

A Haven of Peace

I was able to travel to Dar es Salaam last week for the first time. Dar is the capital of Tanzania and I was excited to be able to visit the obvious hub of much of what happens for the whole country of Tanzania (though for additional information there is also an administrative capital in Tanzania). Dar es Salaam means “Haven of Peace” and was named by some of the first Arabs to make it down this far into Africa. Now, I understand that Dar has developed a lot since the first Arabs came, but it was not what I would consider peaceful. It was on par with most big cities I have been to in that it was crowded and noisy. For Dar you have to add very, very hot because it is close to the equator, but also at sea level right next to the Indian Ocean so there was no relief from the heat due to altitude like there is in Tarime. Despite some discomforts I remained very excited about going to Dar.


My excitement lasted about 4 hours into an 18 hour bus ride that it takes to get there. This bus ride included Tanzanian gospel music videos, a Michael Jackson concert series, WWE wrestling, and Mike Tyson highlights. From there on out the task of simple transportation seemed to rule the trip with two 18 hour bus rides to get to Dar and back as well as several hours a day in city buses going from government office to government office. All that being said the trip was well worth it and fairly enlightening.

I was able to meet several government officials on the national level that will be able to continue to help our work here with Angel House and the soon to be opened school. Anna, our supervisor, went with me and we met with people in the Ministry of Education, the Ministry of Health, Gender, and Children which over sees the Social Welfare Department, and people in the Ministry of Health about bringing doctors into Tanzania to help with free medical care. We were also able to meet with people from the Bishop’s Office of the United Methodist Church here in Tanzania. I am working on something like a local pastor’s certificate to be able to help with the church here in the Tarime area.

I enjoyed seeing a more developed part of Tanzanian closer to the center of what is happening in the country. It was a good glimpse of what is possible in Tanzania if we can only bring some of the best that Tanzania has to offer to the area of Tarime.

It was a productive trip which involved a lot of business. I hope to someday be able to return and experience a little more of the richness of the capital and less of government offices. Though some highlights of the trip included the ripest of oranges from street vendors and Mountain Dew something that has not made it to our side of the country yet.

I am thankful for safe travels and the deepening of relationships in a beautiful country.
Posted by Eric and Liz Soard at 4:11 AM No comments: