No McDonald's Breakfast and Still Blessed

How many of you have recently had a morning like this? I was more than a little frustrated trying to get everything I needed for the day on the back of the 125 dirt bike that I was going to be using for my transportation. Can you imagine trying to get 5 meter sticks, 5 retort stands for the chemistry lab all with long metal poles and heavy metal bases, two soccer balls, and two hand balls all on the back of this dirt bike. I had the bases and balls in a plastic walmart like bag and everything else kind of hanging off the back using giant rubber bands to try and keep it all in place. (This may sound weird to you but it is fairly normal here) This strapping down was taking a while and I didn’t have a while, I was running late.

I was running late because there was no electricity in the house. This meant that the water for the instant coffee had taken longer to boil because I had to use the stove instead of the little hot water appliance. It also meant that the hot water coil for the shower did not work. This meant I had to either forgo the shower or take a cold one out of a bucket. I opted to forgo the shower and yet somehow I was still running late.


So I am finally in place on the bike with 5 meter sticks, 5 retort stands, two soccer balls, two hand balls, my backpack full of stuff for teaching, and 1 very important travel mug of coffee hanging off of the handle bars because for some reason a 125 dirt bike does not come with a cup holder. The road is probably going to bounce half my coffee out, but better half a cup of coffee than no coffee at all because it is already looking to be a long day…it was that kind of morning.


As I start up the bike to pull out and head to the school and Angel House I look up and see a man walking along with a big bag of charcoal on his head. And I stop. Because in an instant my self-pity, my feeling of being rushed, and yes even the sadness about losing half of my coffee go up in smoke just like this man’s charcoal will later, after he sells it. I have lived here in Tarime long enough now to know what this man’s morning was like. It probably started two hours before dawn in a little field with corn or sweet potatoes. He then took a cold bath, like he did every morning, power in town or not. A bath that came from water that his wife had to walk somewhere to get out of a hand dug well. He then put this big bag of charcoal on his head and headed to the market where he will sit all day waiting to sell it all for less than $10 only to go back home. I would guess that he would gladly spend 20 minutes trying to strap it on a motor bike if it would save him the hour walk to the market. Of course then he would also have to pay for gas and the profit margin would be too small to live on. And I realized some of my blessings. (I say some only because I am sure that even at this moment I do not understand all of them)


“I was sad because I had no shoes, until I saw a man who had no feet”


Count your blessings today and every day, because I promise they are there.
Posted by Eric and Liz Soard at 10:44 PM No comments:

This year continues to be a year of firsts in concern to Angel Secondary. Maybe they are routine things for many of our teachers and students, but for those of us who did not grow up in the Tanzanian education system there is a surprise around every corner. Last week we had our first cluster examinations, exams where you go in with four other schools for testing. Following the cluster exams was a “friendly” day of games with one of the other schools in the cluster. Raybu is a school who just finished winning the district soccer tournament and sent 6 of their players to the regional team. They also have almost five times the number of students that we do. It was guaranteed to be an interesting day. It was on this day of games that I realized that we have a liberal arts high school.
I showed up at Raybu, some of our students were already there and some were on their way with the last bus trip. I immediately headed for some tents I saw our students setting up to shade themselves from the sun while watching the soccer and netball (kind of like basketball and ultimate Frisbee mixed together) games between the schools. One of the first things I noticed was how many students were wearing Raybu colors and how many students were wearing our colors. The next thing I noticed is the language. Secondary education in Tanzania is supposed to be English only, Tanzania’s second national language. I knew though, that many secondary schools still allowed students to speak Kiswahili and some teachers even taught in it. This DOES NOT happen at Angel Secondary, and I thought that with Raybu being one of the best government schools around maybe they would uphold that standard as well. Instead I found almost all of the students from Raybu speaking Kiswahili and many of the teachers. This may sound trivial, but language and communication are a mark of education here just like they are in America.
At the end of the day Raybu had won in soccer, had won in netball, and have even beaten us teachers in volleyball. However, all of the games were close, 2 points or less, and the look on their faces when our headmaster suggested an English debate for the next competition was priceless. It was at that moment that I was the most proud of our school. Not because we had found the thing we could win at, but because I realized while we are not bad at sports we will probably never be great either, because our focus is right where it needs to be…on education and the places it can take you.
Posted by Eric and Liz Soard at 12:32 PM No comments:

Church with No Name 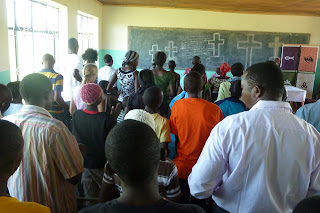 Growing up in the US, you unconsciously grow up in a world of rules, regulations, systems, and labels. Your title, program, group, and status allows you to know how to function and allows others to know how they should interact with you. When it comes to church your denomination, size, and other various church labels help steer you on the right path, and often put in you the boxes that people are comfortable with. 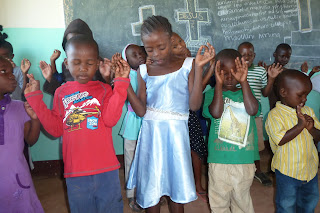 I have both struggled with and enjoyed leading a church with no name, no programs, and no plan. Our only agenda week to week is to worship God and better understand His desires for our lives. Everything we do centers around those two things. And somehow God is showing up. There is no growth plan yet we had almost a hundred in worship for Easter, double what we had in January. There is no building committee, we are happy to have a school classroom and the ability to invite people from the community to join us. There are not programs, yet our Children’s Sunday School has almost 50 kids and we started an Adult Bible Study by announcing the time in church and promising them Bibles if they would just show up to study them. There are no committees, yet people volunteer to lead children’s Sunday School, be the liturgist for worship, and sing in the choir. It is a simple, amazing, and most certainly humbling experience. 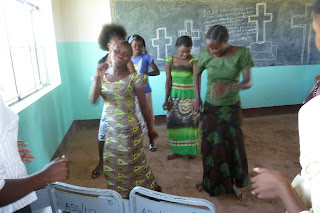 The church is a big part of the life of the children at Angel House and becoming a bigger part of the life of our neighbors in the village. We started off worshiping in public, outside of the children’s home, and a little over a month later baptized around 45 people. The children at Angel House are constantly asking questions about God and the Bible and people in the community are learning to seek God’s will. It has been a blessing to see the spiritual life of so many people blossom, it is also comforting to know that in an area where life is hard, and resources are scarce people are relying on God. I am kind of hoping at this point that we keep going with the no name thing and allow ourselves to fully focus on that which is most important, God. With that label, how can you go wrong?
Posted by Eric and Liz Soard at 11:04 PM No comments: