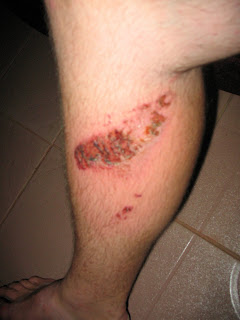 Malaria symptoms include: fever, headache, body ache, vomiting, diarrhea, dream-like state of mind. Severe cases also include hallucinations and foaming at the mouth. Things that are not malaria: third degree burns on the leg, the common cold, a severely sprained ankle.


The health care system really is not as bad as many countries and there are four major hospitals here in Tarime. However, each has strengths and weaknesses. My first run-in was when I took Joseph Charles, Chu Chu, and Edward to the Tarime Dispensary. The Doctor is extremely polite and it is open twenty-four hours! However, every time we send children there they have to spend at least a day getting fluids. The staff has chosen not to send our kids there unless we have to because they feel it is a waste of time. Also, I am not a huge stickler for cleanliness but they did not use gloves to take blood and they mixed Edward and Chu Chu’s blood samples when transferring them to the light bulb in the corner that was heating the blood. UGH!! The Government Hospital is where most people go because they have a Labor/Delivery section and it is cheaper than most. I had the fortunate opportunity to experience Jenn Williams while she was in labor. They had three women to a bed all of whom were in labor. No men were allowed in the building and every so often they would check and see if she was ready to give birth. However, she had to vomit and endure the pain all alone. I decided that I would fly home to give birth if I ever got pregnant here. The Catholic Hospital is where I now take all of our children. They are clean and efficient. However, they do not ever touch the patient. They ask what the symptoms are and write lab tests down. When the lab results come back, they prescribe a list of medicines that match the symptoms or the lab results. The lab tests include: mbs (which gives the amount of Malaria bacteria in the blood), sometimes a urine sample, sometimes a stool sample. They only take a syringe amount of blood to test for Typhoid and HIV. No matter what the symptoms are the patient is always tested for Malaria. I was absolutely shocked the other day when I took a child, who I knew had a common cold, and they tested for Malaria and it was NEGATIVE. The look on his face was priceless!

The only hospital in town that we go to as Americans is the Goodwill Hospital. They are good. Holly and I go about once a month to get weighed to see how much we have lost being here. Most of them speak English and realize that we are used to a specific amount of medicine. I took Eric yesterday to get his third degree burn looked at. Of course, it is infected. However, the doctor wrote the list of medications and the nurse giving out the medications read them and said, “Oh! You have Malaria.” Really???

I write about this not to go off on a tangent; although I did anyway, but to inform you all what it is like here. Everyone assumes that when you are sick it must be Malaria. I know that it is because the death rate for Malaria is extremely high and it is safer to assume that than to allow a child to die. I have become extremely aware of how much this country needs Health Care Reform and only wish that I had the expertise or training to do so. It breaks my heart to take a child to the hospital only to be told that it is Malaria, knowing very well that it is not. Last month I took seventeen children to various hospitals for tests and treatment. I pray that one day they will really be healed and there will be no more suffering.
Posted by Eric and Liz Soard at 6:10 AM