The Adoption That Already Happened

I think that this year is going to be a year of hardships, punctuated by highlights. Maybe I will cover some of those in another post, but one of the definite highlights of this year has been the successful adoption of Derrick. It kind of figures that the day we get the call for us to be in court in Mwanza the following day we would both be outside of Mwanza, not together, with Liz flying to the US in less than 48 hours. If you know much about our lives this just kind of fits into it. I was able to contact Derrick’s uncle, the Tarime Social Welfare Officer, and Liz in about 15 minutes and get everyone moving towards Mwanza, including sending money by mobile transfer for transportation for Derrick’s uncle. Personally I was heading 1 ½ hours out from the closest town towards one of our village churches with a 13 person volunteer team. Liz was in Tarime with the GBGM auditor showing him some of our recent projects. Long story short we all made it to Mwanza that night, me spending 3 hours on the back of a small motorcycle, 2 hours in a public shuttle bus, and 4 hours driving in order to do so. But it was all nothing more than a thought because this was the day we have been waiting on.

Liz and I have been married for 7 years and for 5 of those years we have been waiting to make our family legal on paper the way that we felt in our hearts. Derrick is the one that first made us parents, yet is the last one to be able to be recognized as fully ours. During the 5 years that we have been waiting for the adoption process to reach it conclusion we have had two other children, I finished my master’s degree, Liz has almost finished hers, we have had two different jobs, and multiple adventures. 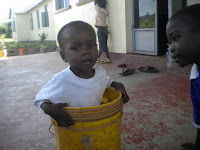 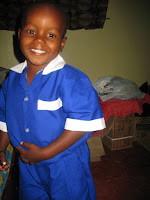 Yet Derrick’s point of view has really come out in the last year as we started to see true progress, first being approved to foster in April of 2014 and then finally approved as adoptive parents in May of 2015. What has been most touching in this process has been Derrick’s reaction to hearing that we are his foster parents and then his adopted parents. He NEVER once reacted with the idea that we were his parents…

When he heard that we could foster him he was excited that he no longer had to go to boarding school. When the judge said that we were granted the adoption order Derrick got this huge smile on his face and as he walked out the door he turned to Liz and said, “Does this mean I get to go to America?” The fact of the matter is that Derrick never once doubted that he were his parents. He understood in his own way that fostering meant he could live with us and adoption meant that he was now free to travel anywhere we as a family would travel, but never did any of that news ever make his ask if we were his parents. He already knew that, there was never any doubt. Through all of the ups and downs of these last few years we had already, unknowingly accomplished what we decided in our hearts in 2010...we had been a family. 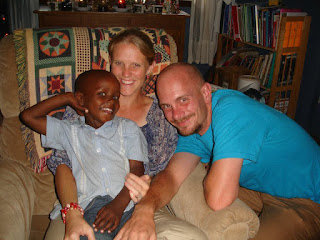 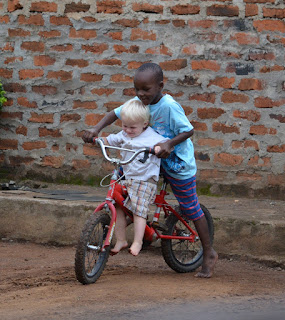 I wonder sometimes, especially during what is both a joyous and very hard time in our lives, what signs we often wait on in order to recognize that we are God’s children? God knows us as his children. What are we waiting on in order to be able to live with him in our hearts or invite him to travel with us in our lives? And how are we helping others to know that they are fully children of God? No restrictions, no more boarding school, no more staying home while everyone else travels, but fully adopted, faith-filled, children of God.