“Do not be afraid, for I know that you seek Jesus who was crucified. He is not here; for he is risen!” 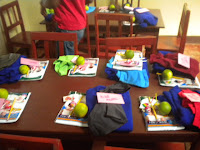 When I was growing up, Easter was a special day. I got a new dress, candy, and sometimes a stuffed rabbit or some type of present. Being the preacher’s kid we always went over to a church member’s house and did an egg hunt as well as ate LOTS of food! This year was the same in many ways. The children got up and had breakfast like any other Sunday morning. However, when we arrived we made all of them go into their rooms and wait for their name to be called. We set out gifts for each of them on the tables and waited anxiously for each of them to come out. The older girls received their favorite lotion while the older boys received a pair of boxers and a white tank top (wife beater). Each secondary student also received a school sweater because it is getting colder in the mornings. The younger girls received lotion and soap and the younger boys received a belt and soap. All of the new children received a new school bag. All of the children were given pencils, stickers, and fruit. The three of us, missionaries, took great joy in taking pictures and watching their facial expressions. Many of the children, particularly the new children, had never received a gift like this before. It was as special for us as it was for them. We felt like the parents on Christmas morning. 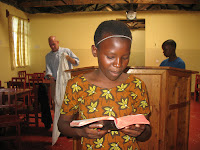 Church was lively! Each child dressed in his or her best outfit. One of the boys, Richard, even had a three piece suit on! Eric changed the order of worship on them to add more scripture. We went through the story of Jesus’ entry into Jerusalem, crucifixion, and resurrection. The children took turns reading the story aloud and between the verses they would sing. Each group had prepared a song and dance to share. 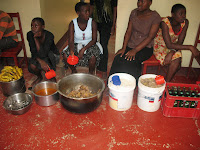 After church, they all wanted to play games. The boys put together a soccer match against one another and the younger children ran around pretending they were cars. The shangazis prepared the eight chickens of whom I took part in the sacrifice of, rice, pilau, and bananas for everyone. There was more food than anyone could have ever finished off. The meal was not just something to fill their stomachs but a big part of the celebration. For many of the children, they only ever have a similar spread of food on very special occasions. The food was an occasion in and of itself. They ate the same thing for dinner that night. It was wonderful! 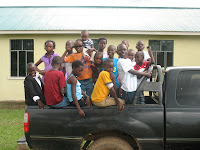 Goldland Hotel holds a dance every Easter for the children of Tarime. We took the younger children first to enjoy time before the older kids came. They all ran on stage to dance, after they enjoyed another soda of course. They all had so much fun dancing and playing around. We took the younger kids back so the older kids could come about an hour later. Most of them bypassed the soda and went straight to the dance floor. A few of them did not come off the dance floor until we went in to get them. The lively music and community atmosphere is normal and representative of any African celebration. The most important thing is that everyone enjoyed themselves.
Posted by Eric and Liz Soard at 6:25 AM