Life is Lived in Gray 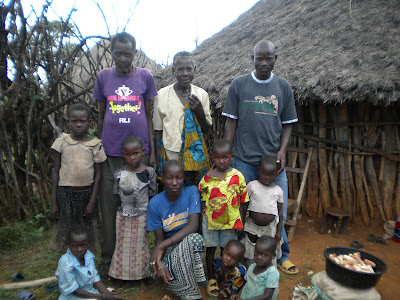 Liz and I came to Tanzania to help. Specifically to help kids who had lost both parents. In the month since we came it has been an up and down roller coaster of happy and sad, easy and hard, fulfilling and disappointing. Such as ministry, but we came to help. This past Friday we had our first opportunity to add a new child to Angel House. We were excited as we headed to his village (minus the two hour bumpy ride that left us physically aching after driving Little Burtha). We had the funds in place, his bed ready, and our hearts open to a new child. I never thought it would the benchmark experience of this trip in terms of happiness and sadness all in the same day.

As we walked up to a small set of mud brick round houses we were greeted in the typically warm fashion of Tanzania. We met 8 kids, 2 grandparents, and 2 parents. The 8 kids were from the three sons of the grandparents. The youngest was the only one still alive and taking care of all of his brothers’ kids as well as his own. This is when the moist eyes started. As the family history was rolled out before us we realized the hurt they had endured and the gift they were giving us. The only child of the middle son whose mother had died two weeks after his birth due to complications because of AIDS and whose father died of AIDS two years later. His need was obvious. Cha Cha only speaks his tribal language, not needing before this to know Swahili (with English out of the question). He was also in need of quite a bit of medical attention since he seems to have malaria and worms. Mwita, our day guard and shamba man, went with us to pick him up because he was good friends with the boy’s father. Mwita explained to the family that we would provide his basic needs and education. His future got brighter and brighter the closer to Angel House he got on our 2 hour trip home, but it was tinged gray by a crying grandmother and aunt who remember the father and mother that he never knew. Tears streamed down Mwita’s face as he was filled with joy and sorrow, knowing what we can provide while also realizing the devastation of the parents of his best friend.

Life is lived in gray. We took pictures of a family Cha Cha may only grow up remembering, but his smile this morning (the first one we have seen since we picked him up) is evidence of a lot of light in the future.
Posted by Eric and Liz Soard at 1:21 AM