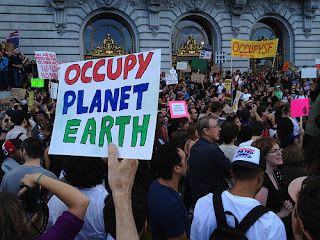 It has been exciting to see people in the US, people who many others in the world consider to be the most consumer driven of any world culture, stand up in the last month and say enough is enough. How much does a person need to be truly satisfied? One international news organization called it the “American Awakening.” What if this really is the start of our realization that there is such a thing as too much and nobody really needs the Supper Size Fries from McDonalds. As a Christian I feel called to a different set of economics than the “consume as much as you can” mentality and it seems that most of Americans agree, or at least those not in the top 1%. And worldwide we have the same problem. 20% of the world’s top earners are earning 75% of the world’s income. My question though is would people still stand in protest if they were in that top 20%? Would you be willing to stand at a protest where it was your picture on the poster? 20% of the world’s top earners are earning 75% of the world’s income, but also consider that 80% of people in the world live on less than $10 a day. That means if you spend more than $10 a day on food, rent, gas, car payments, movie tickets, and health care than you fall in the top 20% of the world’s economy. As a note of honesty and openness, even I the missionary fall into that category of the world’s top 20%.
I guarantee you that if you own a computer and are reading this blog that you spend more than $10 a day for your family, especially since statistics like this are calculated not based on currency exchange, but on purchasing power which means that the fact that it is cheaper to live in a developing country is already taken into account. I have a feeling that many of the people I know who do live on less than $10 a day would find it odd that people protesting economic inequality are doing so while wearing North Face jackets, at least if they understood how much they cost. So are we ready? Are we ready to move onto the next step? Are we ready to do more than stand on sidewalks and debate which political party will best be able to take advantage of this movement in the 2012 election? Are we ready to live simply and divert the rest of our resources to others in need? You can make that choice right now and I can help.
All of the following people live on less than $10 a day, actually they all live on less than $2 a day which is the international mark of extreme poverty, the kind that experts say people cannot get out of on their own.
Nelson Mandela and Raphel Charles – For less than $2 a day you can pay for a year of education for
either of these young men
Wikindi Juma – For $1 a day you can put him through adult education classes where he can get a
secondary certificate in 2 years (something that normally takes 4)
SO ARE WE READY TO OCCUPY AFRICA?
If you bring the signs I will free up some sidewalk space. You are welcome anytime.
Posted by Eric and Liz Soard at 10:16 PM