The Growth of a Village Church or Baptism No. 2 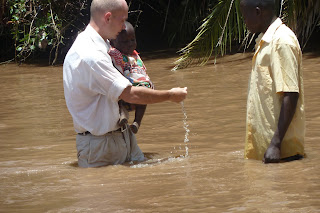 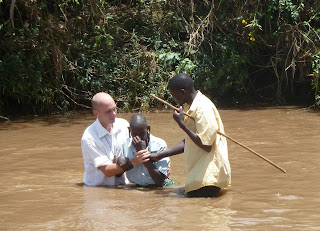 October 9th, 2011 saw the second baptism celebration of the year at Gamasara United Methodist Church. I will start with saying that we ended the day with music, food, and soda. Baptism should always be a cause of celebration. It is not a magic ticket into a life of perfection, but it is the start of a journey where God can perfect us in love as we live in this world. It is the entrance into the house of God. The difference this baptism and the first one of the year was the group of people being baptized. The first baptism of 2011 was mainly those children of Angel House and others that were connected in some way to Angel House. However, God has a way of growing things in small ways through unexpected means. This church that was held up by the children and staff of Angel House has crept into the village of Gamasara and is starting to change lives. The number of children baptized was astonishing, but equally warming to my heart was the number of older people being baptized. There were several Bibis (grandmothers), with ear lobes almost to their shoulders in traditional Kuria fashion, who were for the first time accepting God into their lives the same as they had been accepted into the church. Possibly even more incredible were the number of grandfathers and men that were baptized. Just as in America, men are noticeably absent from the church seats in Tanzania. Having the church grow in the number of older members and men was a testimony to the way in which the church is reaching out into the community and being used as a tool of God to reach many who have not previously heard or accepted the message of God. 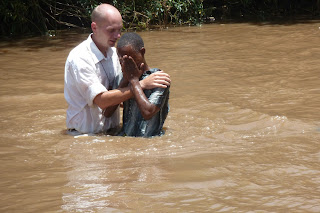 After over two months of baptism class and special times of teaching for older children in between childhood and adulthood, 94 people were baptized into the church. This is a church of God and he is starting amazing things here in Gamasara. I believe that he has plans for all of those people to bear witness to how he is growing his kingdom here in this part of the world.
Posted by Eric and Liz Soard at 4:41 AM