*So much has been happening lately that I have been very regular in updates, thoughts, or just about anything. Hopefully I will start catching up soon. At least I will get this one in, even if nothing else follows*

When I first heard about the Jewish understanding of sacred time and space in college I have to admit that it grabbed my attention…but probably not for the right reasons. I have always been a little bit of a nerd and internal romantic (which I believe all nerds are) and am captivated by almost anything that is larger than life for the simple fact that it is larger than life. The realm of myth, legend, and the sacred have always held a fascination for me. So the idea of sacred space and time was captivating to my internal senses. As I left college and entered work in the church world, specifically youth work, I became captivated by something else. A lack of constraint on our time and/or space with God. The idea of communion with crackers and soda, having church in a warehouse or a person’s home, and that the most spiritual hours were between 1 am and 4 am, and the pizza and donut binges of lock-ins. However, I still had the long-standing (some would call it institutional church) to fall back on. 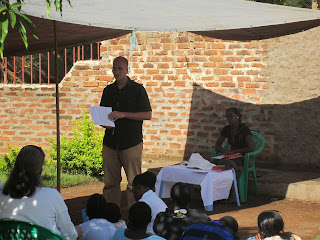 I do not think I realized how much I was falling back on the established church until it wasn’t there. Here in Tanzania the United Methodist Church is still young. Very young. Like around 20 years old. Which makes it younger than I am. Which is weird. This also means that we don’t have very many traditions, ways of doing things, or…sacred space. At first I thought it was sooo cool that we would worship outside, in people’s homes, under tents, or in rented movie theater


space. But eventually I started to miss something and it was my brothers and sisters in Christ here in Tanzania that helped me start to figure it out. They were the ones that wanted church space, a concept I was at first against because I had seen church buildings in the US becomes idols, and, well, it is more expensive than worshiping under a mango tree. 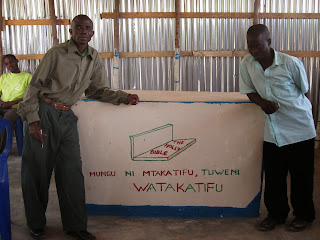 But there is just something about sacred space, the heaviness, the tradition, and the tangible layers of prayers that have been laid on a place year after year, crisis after crisis, and celebration after celebration. There is something about a space being devoted to something bigger than ourselves and our normally daily activities that is special…and well, sacred. Home is where I eat, sleep, laze on the couch, hug aaaand sometimes yell at my kids, make-out with my wife, and clean up anything from toys to mud the dog brings in to baby poo. It is just not the same. Part of the concept of sacred space is designated space, a place where you go, enter with respect, because this space serves a higher purpose than your own selfish designs. It is there for a higher cause and for more than just one person. It is sacred in its designation, use, and devotion.

It was with all of this in mind that we finally agreed to start helping in the construction of churches and the creation of a homes, not for an individual family, but a common, sacred relationship that connects people around a central Creator, first-born brother, and counselor/teacher. 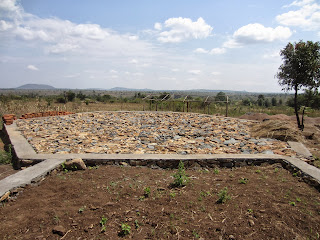 We have been able to buy or receive donated land for five churches and have reached different stages of construction for four of them. We have prayed, celebrated, and given of our time and labor to see these spaces created and they are being used for baptisms, weddings, the dedication of babies, and community meeting space. We have blessed the foundation stone for one church with several more to go.

It is an exciting thing to see these spaces created, used, and start to layer on prayers, community celebrations, and the heaviness of time that will in the future make them pillars for the community and the church, a piece in others own sacred journeys just as other places have been for me.
Posted by Eric and Liz Soard at 4:04 AM