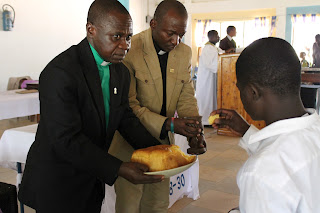 Leave at 6 am only to arrive home again at 10 or 11 pm pretty much sums up our experience of hosting the Tanzanian Annual Conference. Which is probably why so much of it was a blur, however of the parts I do remember it went pretty well. The Mara District, where we are, is the newest district in the conference, which means that we don’t have a lot of people or resources to pull off hosting 80 people for a 3 day meeting. Yikes! Yet, we received a lot of compliments from everyone attending. They enjoyed the choirs (video on Facebook), worship went well, the special guest showed up to opening worship, everyone got enough food, and we finished almost on time every night. Not too shabby considering it was not only our first time to host Annual Conference in Tanzania, but the first time for all but three people from our district to even attend an annual conference in Tanzania (Liz and I included).

The end of Annual Conference concludes the second chapter of a time where perspective is becoming increasingly important in my life. I am realizing that how big or small our view of our life and situation is makes a large impact on how we see and understand things. This was true during my grad classes as I was able to pull back from life in Tarime, TZ and look at the bigger picture of my call and place in my work (possibly more on that later) and it has been true during Annual Conference.

Perspective for our district. The churches within our district all sent people to help with Annual Conference. We had choirs from different churches, people to help cook and serve food, people to help with transportation of delegates, people to run the sound system, people to make sure that everyone had a place to sleep (a hard job when we had to arrange for almost 100 people to stay in hotels or in people’s homes). All of these people have been active in our local churches, some for years, some for a few months. Almost none of them had any idea how large the United Methodist Church is. They had never seen anyone outside of our 6-7 churches here in the Mara District. They had certainly never met anyone from outside of Tanzania associated with the United Methodist Church (except for us). As we wrapped up the meeting they were all tired from working so hard, but they were also all inspired by the perspective they had gained, that they are not alone, that they were part of a much larger organization, a much larger church than they previously thought. It was a shift in perspective of many of our church members who were present at Annual Conference.

Perspective for our work in the district. When I read out final numbers for our district report to the Annual Conference we got a round of applause. We don’t have large churches, only 549 men, women, and children between 7 churches. We can sometimes get frustrated with the 2 steps forward 5 steps back progress that we seem to be making with most of the projects or churches we are working with. What I was reminded of was that in 2011 when one person went to Annual Conference that she only had a report to give from one church of maybe 30 people. All of the others had either closed or had lost connection with the district because of a rash of bad leadership within the district. In just two short years the Mara District has made large leaps and bounds of progress, I just had to be reminded of that.

Perspective on our work as missionaries. No matter what you may think, I don’t like to be the center of attention, certainly not in front of that many people. I like talking about other people or other things, but under no circumstances am I comfortable talking about myself...or having others do so. I was fighting to not turn red in the face, and Liz lucked out as she was outside at the time when we received a large dose of needed encouragement. One of the special guests to Annual Conference was Joseph Mulongo from DR Congo. As still relatively new missionaries we can never be sure how well we are doing. Rev. Mulongo, a district superintendent of a large district in North Katanga Conference of the DRC was quick to assure us, in front of the entire conference, that we were clearly coming to our work in Tanzania as servants. That is a label I can wear with some confidence. A posture that we strive for, but can never be sure if we are achieving.

Overall Annual Conference, as tired as we were on Monday as all of the guests left, was a time of perspective as missionaries and church members alike gained a good perspective of the work of the church and our place in it.