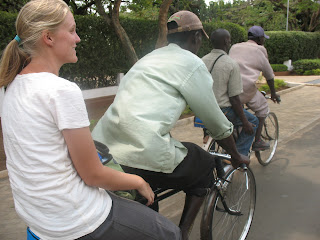 Zach is a friend of mine here in Tanzanian. He has worked as a translator for me and we have also practiced martial arts togehter, though he is much better than I am and just last year was able to travel to China as a Tanzanian representative at the Wushu World Games. This past weekend I was able to meet his mother. It was a good weekend in that I was able to see Kisumu (a city in Kenya) for the first time. Liz and I were able to experience some new forms of transportation and got to see the biggest Nakumaut (Wal-Mart/Mall) in Kenya. However, the highlight of the weekend will always be meeting Zach's mom, Nereah. 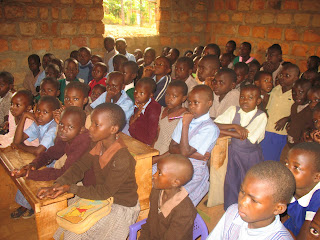 The first thing she did when we walked into the house was start to pray, thanking God for a safe journey. This was before we were even introduced. She is a strong matron of this family of very strong men. There is a church built on the property where there is weekly worship. It is also the site of the start of St. Peter's Academy, a school that the family owns and runs. St. Peter's was started because there were orphans in the area who were not being educated so Nereah started teaching them in the church. The rest of the family found out and decided to turn it into a full school. St. Peter's opened in 2005 and now has nursery up to class 8 (all of the primary grades in Kenya). The family has built classrooms little by little as funds are available and even though their teacher workroom is a table and chairs outside the school finished 3rd in the district in 2010 on the national exam. This is a school where half of the students do not pay because they cannot afford to. School uniforms are not quite uniform because school administration would rather see students in class studying and at home eating than spending money on school uniforms. This is the result of a faithful family and especially a faithful mother.


Yet it was not always this way. Zach's father was a polygamist for a long time. He had 7 or 8 wives (I never quite got an accurate count from people) resulting in 15 sons and 48 daughters. He was known in the entire district and a few surrounding ones for fighting, drinking, and mistreating his many wives. The discipline at home was strict and the only clothes dad ever paid for himself were school unifomrs, everything else was up to the mothers to provide. Nereah used to constantly be in trouble for disobeying her husband by going to church outreach events, going to worship, and taking her children with her. This also resulted in her husband refusing to build her a nice house or provide some of the things he would provide for other wives who did not disobey him. However, just as she prayed every morning when we entered the house and every night before we went to bed, she never gave up on her husband. She continued to pray and worship this God and his Son that She loved. After many years, many wives, her husband finally accepted God. This is when life on the plateau started to change into what is seen there today of a family with respect, love of God, and love for the many struggling families around them.

If you have ever been frustrated by God's timing I hope you take the time to read this story again. The full context of it is even more amazing, but too long to tell here. I can promise you though, through the life experience of a woman who still only speaks her tribal language of Luo, yet who has been asked to speak at outreach events all over the country. God can and does change lives in his time and the most faithful person I have met in a long time is living proof.
Posted by Eric and Liz Soard at 1:46 PM