I had heard mixed reviews about the movie Avatar before we left for Tanzania. I almost saw it in theaters, but could not quite find the time in the busyness of getting ready to leave. I saw it yesterday and it did a good job of giving words to what I have felt since coming home. In the movie humans from earth have found a way to psychically connect with a biogenetically engineered body that looks and moves exactly like the aliens they are trying to connect with. The humans are put in this machine that facilitates the connection. While in the machine their body is still and they exist in the body of the “avatar.” When their avatar goes to sleep they reinhabit their own body. The same person, same mind, same soul exists in two different bodies and effectively two different lives on the same planet and physical plane. The point of the story is the journey of one of the humans in falling fully into the life of his avatar.
This may seem like a weird description of returning to the United States, but it fits. I have not experienced the culture shock that I expected. I did not flip out the first time I walked into a Wal-Mart and the food choices do not seem overwhelming in the least (surprising after months of rice and something for most meals). I do however feel like I have two different lives in two different paces on the same planet. The differences between life in America and life in Tanzania are so different that it is hard to connect the two, it is hard for them to both be real to me at the same time. I feel like when I got on the plane to come here I left a body back in Tanzania that will be there ready to be inhabited when I get on the plane to return (maybe someday I will be able to determine which one is the avatar). It is possible that this problem of identity is my way of dealing with culture shock considering I have been back on US soil for less than a week, but the differences are staggering and hard to reconcile. Take the story of Chacha for instance… 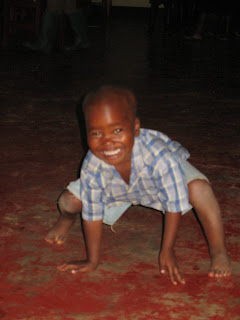 Chacha is the last child that came to Angel House before we left to come back to the US. Unlike many of our children he has a father still, however his father lost most of his arm in a mining accident. In our part of Tanzania once a person is disabled to that extent their only viable option the majority of the time is to beg for a living. When I first met Chacha’s father he had two sons a 3 yr. old and a 5 yr. old. When I saw him again three weeks later he only had a 3 yr. old. The older son had died from malnourishment and medical problems, both things his father didn’t have enough money to do anything about. The day he brought Chacha to us he stayed for Sunday morning worship and then left. Chacha screamed and cried for hours and the father looked like he wanted to. It was a loving relationship of father and son, but the father realized that the only way for his son to have a future was for him to stay at Angel House.

This is how things work in Tanzania. In the US he could have found a vocational retraining program that would have helped his learn a trade that only needed one arm. He could have found a job that was not as intensive on the manual labor side. He could have found assistance for his children for food, housing, and medical care. Here in the US there are options, in Tanzania there are not. Two worlds that exist on the same planet.
I hope that I can bring the two lives I live together. I hope that the resources of one can meet the problems of the other.
Posted by Eric and Liz Soard at 2:46 PM