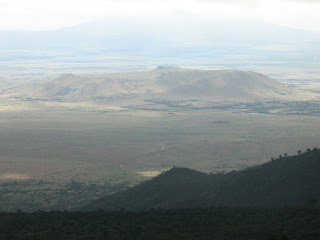 Eric, Holly, and I travelled to Nairobi a few weeks ago. On our eight hour journey we were fortunate to experience driving through the Great Rift Valley and talking the driving into stopping so we could take pictures at the top of the mountain overlooking the Valley. This was only possible because out of the five people on the bus, we were three of them. As I looked down at the valley I thought of the analogy that many inspirational speakers use of the mountains and valleys in our lives. The mountains are the times that we are closest to God and are full of happiness and life. The valleys are the trials, grief, sin, etc. that swarm our minds and bring us down. Some time before this trip Eric and I stayed out at the House and one of the kids, Nyanokwe, could not stop crying. He kept saying that he missed his father and how much he wished he would not have died. He cried himself to sleep after some of the older boys tried to comfort him and explained that if he would only go to sleep, then he would wake up and things would be better. Well, he woke up and his eyes were bloodshot. He had obviously cried all night and well into the morning.


It has been difficult to explain to the kids that it is not easy now and the pain of losing a mother or father will never go away. However, the way they live their lives from here on out is what shapes them. This past week we have been sitting down with the kids listening to their life stories. They have told us about the physical and emotional abuse, the abandonment, the hunger, and the psychological pain that they have endured in their short lives. When our oldest child, William, sat down with us, he explained that he wants to forget about all that happened to him. Although it has been nearly five and a half years since he came to The Angel House he has not forgotten even the most intricate of details. William told us about the chicken, rice, and chai that was prepared by his father for his family that was laced with poison and how they watched the ground whither when their mother poured the chai out. William and his siblings will never forget how their father tried to kill them multiple times. They will never forget the night their mother was in the middle of preparing dinner when she said she had to go to the store to buy something; only, she never returned. William was left to care and provide for him and his four younger siblings. His path has been hard and full of thorny bushes. However, he is the hardest worker we have and extremely well-behaved. I have no doubt that whatever is in his future will never be as difficult as what he has already endured. He is living proof that life is hard but you determine how you handle and cope with life.

Every person, including the children here, has their own Great Rift Valley. Life is not easy and the impact it makes on us will never leave us; however, there are mountains that line both sides of the valley. We just have to climb up instead of giving up.
Posted by Eric and Liz Soard at 11:56 PM